An Article in the Orange County Register 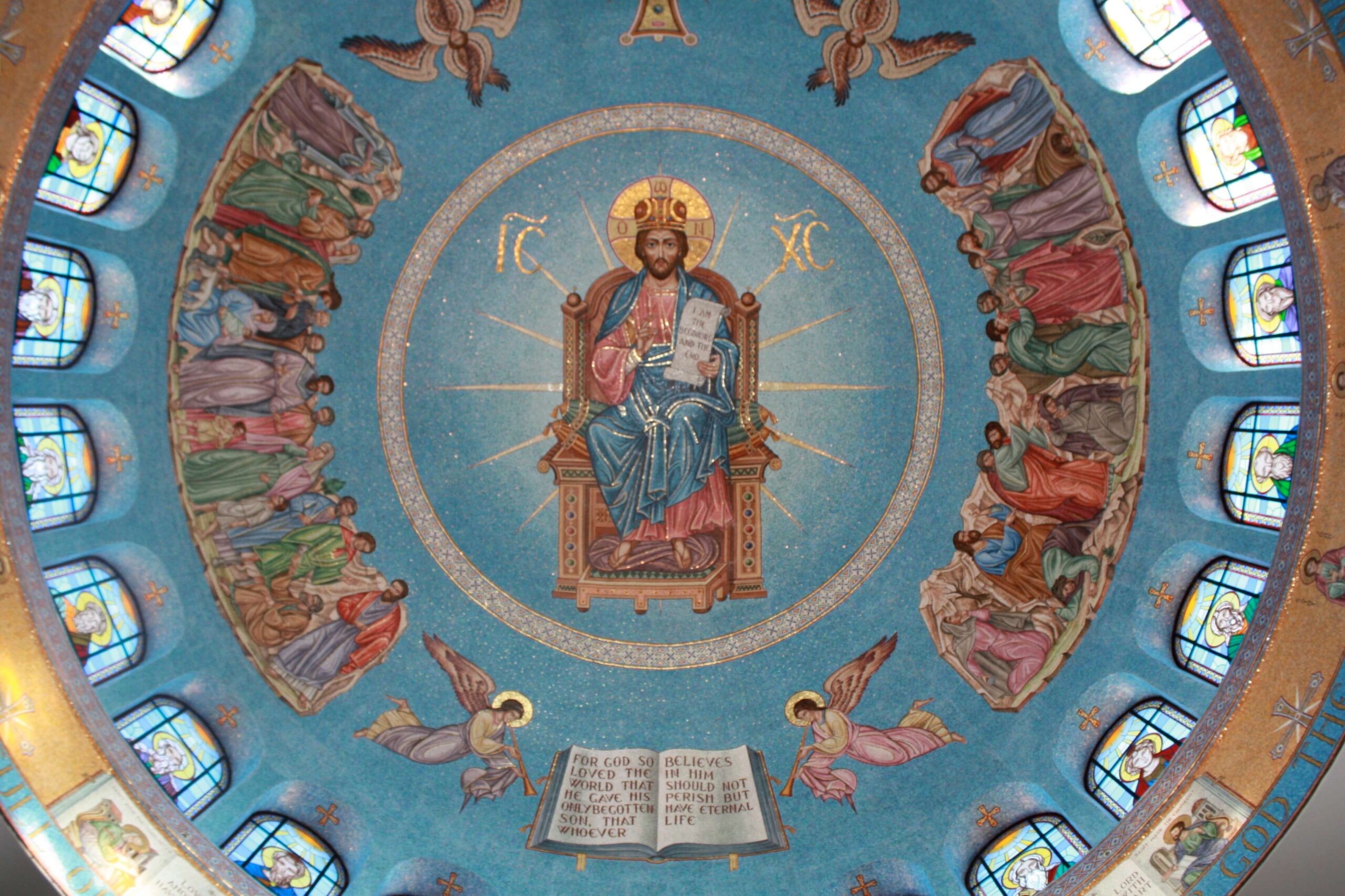 Picture more than a million pieces of glass — all coming together to form a grand, colorful mosaic of Jesus, the apostles and the final day of judgment. Add the sophisticated, yet fundamental sounds of the Chilingirian Quartet and the polyphonic, medieval voices of the Anonymous 4. Round that out with a brand-new, Orthodox-inspired work by famed mystic minimalist composer John Tavener, and you’ve got a recipe for the ages.

The Philharmonic Society is presenting “Music for the End of Time,” two evenings of spiritual music and art on Friday and Saturday at St. Paul’s Greek Orthodox Church in Irvine. The performances, part of this year’s Eclectic Orange Festival, will be the first opportunity for the North American public to hear Tavener’s piece “The Bridegroom,” and to see the most recent work of renowned Italian artist Sirio Tonelli.

“It’s the realization of a dream,” said Rev. Steven Tsichlis, pastor at St. Paul’s Church. He commissioned the $750,000 mosaic and is co-producing the Tavener work. “It’s a celebration of who we are and whatever gifts we have to offer the broader community,”

Tonelli, an expert in Byzantine mosaics, has created a massive work — one of the largest of its kind in the country — that lines the church’s 36-foot-diameter domed ceiling and arches 60 feet above the floor.

The mosaic depicts the righteous on one side and the damned on the other, with Christ sitting on a throne in the middle, holding the Bible verse John 3:16.  Old Testament figures sit in the dome’s windows, and the 12 apostles and four Gospel authors line the base of the dome. Sky-blue squares surround details of color and gold leaf.

“It’s an expression of our faith,” Tsichlis said. “Beauty strengthens our faith. We’ll have two very enduring works of art, all very interconnected.”

The Orthodox faith stems from St. Paul, who spread the gospel throughout the Mediterranean and Asia. It is separate and distinct from the Roman Catholic Church and Protestant denominations, which came afterward.

Constantinople is considered the center of the Orthodox church. From there, missionaries traveled to Greece, Russia and other parts east, establishing different branches of Orthodoxy.

“The New Testament itself was written in Greek originally,” said Tsichlis, 47, whose grandparents came to this country from Greece. “Paul preaches in Athens in Acts. We are that Church that the Apostle Paul wrote those letters (Corinthians) to.”

Devotees of Greek Orthodoxy feel a particular connection to St. Paul. In fact, St. Paul’s Church in Irvine features a large mosaic of St. Paul above its entrance, also created by Tonelli.

For British composer Tavener, the Orthodoxy is nothing new. He converted to the Russian Orthodox faith 23 years ago, after recording two classical albums on the Beatles’ Apple Records label. Since his conversion, he has attempted to create “a lyrical icon in sound” through works such as “Orthodox Vigil Service,” “The Protecting Veil” and “Fall and Resurrection.”

While he may be best known for “May Flights of Angels Sing Thee to Thy Rest,” the soaring choral work performed at Princess Diana’s funeral, he has spent the past couple of decades seeking musical and philosophical roots in ancient traditions.

Tavener’s style is marked by slowly moving harmonies and strongly spiritual and devotional overtones. His recent work, “The Bridegroom,” is based on the parable of the wise and foolish virgins, as told by Jesus in the New Testament. “A lot of (Tavener’s) music is based on our liturgy, based on our style,” Tsichlis said.

Anonymous 4 and the Chilingirian Quartet

Performing the Tavener work will be the all-female quartet Anonymous 4 and the Chilingirian String Quartet.

Anonymous 4 — Marsha Genensky, Susan Hellauer, Jacqueline Horner and Johanna Maria Rose — came together in 1986 as an experiment with the sounds of medieval chant and the polyphony of higher voices. The group’s initial performance was a surprise success, and since then, Anonymous 4 has recorded extensively and has toured throughout the world. The bulk of the quartet’s sound comes from published music stored in monasteries and abbeys from the Middle Ages. Anonymous 4 gets its name from an unknown 13th-century Englishman who, as a student in Paris, wrote about the vocal polyphony then being performed in Notre Dame’s cathedral.

The Chilingirian Quartet formed in London in 1971 and gave its first concert in 1972. The quartet — Levon Chilingirian, Charles Sewart, Asdis Valdimarsdottir and Philip De Groote — has also toured the world and recorded many albums. The four players are now the quartet-in-residence at the Royal College of Music in London.

The Chilingirian has a strong association with several contemporary British composers, Tavener in particular. Tavener wrote both his 2nd and 3rd string quartet compositions specifically for the group, and had them in mind for “The Bridegroom.”

For the Philharmonic Society, all these collaborations bode well.

“The festival is a fertile ground for collaborations such as these,” she said. “Collaboration is a big part of the spirit of Eclectic Orange.”