Working for Unity Among Christians

“May all of them be one, Father, just as You are in Me and I am in You. May they also be one in Us so that the world may believe that You have sent Me. I have given them the glory that You gave Me that they may be one as We are one. I in them and You in Me, that they may become completely one, so that the world may know that You  have sent Me and have loved them even as You have loved me.”

“I appeal to  you, brothers and sisters, in the Name of our Lord Jesus Christ, that all of you agree with one another in what you say and that there be no divisions among you, but that you be completely united, and of the same mind and opinion.”

“I think that the one great goal of all who are really and truly serving the Lord ought to be to bring back into unity those churches that have, at different times and in different ways, been divided from one another.”

Since the early years of the last century, and especially since the 1920 Encyclical of the Ecumenical Patriarchate addressed “To The Churches of Christ Everywhere,” the Orthodox Church has been actively engaged in dialogue with other Christians.

Orthodox Christians believe that the purpose of conversation with other Christians is twofold: first, to identify differences in teaching and worship among those who claim Christ as Lord and Savior, to clarify disagreements and work to overcome, if possible, all errors and divisions; and second, to cooperate in doing good works in the Name of Christ where such cooperation for the good of humanity – such as feeding the hungry, aiding the poor, settling refugees, etc. – is possible and desirable.

In doing this, Orthodox Christians are following the example of their Lord and Savior, Jesus Christ, who conversed with the Samaritan woman at the well (known in our tradition as St. Photini) and even drank water from the cup she offered Him, contrary to all Jewish law and practice of His time, because Samaritans were: first, heretics who did not worship at the Temple in Jerusalem but had set up their own Temple in Samaria; and second, not a part of the chosen people but an ethnically different stock than the people of Israel.

Heretic and sinner that she was in the eyes of the Judaism of her time, we believe that her encounter with Christ Jesus led her to holiness and eternal life. Orthodox Christians must act as our Lord Jesus did, being willing to speak with anyone, knowing that the Holy Spirit may use even our poor witness to His glory. In doing so, we follow not only the example of our Lord but the witness of canonized saints such as Philaret of Moscow, Tikhon of Moscow, Nicholas of Zica and Nicholas of Japan as well as theologians and teachers such as George Florovsky, John Meyendorff, Alexander Schmemann, John Zizioulas and Thomas Hopko.

An introduction to the challenges and opportunities presented by the participation of Orthodox Christians in the ecumenical movement over the last century is:

The Challenges and Potential of Orthodox Ecumenical Dialogue

This is an article written by Dr. Eve Tibbs, a parishioner here at St. Paul’s and an affiliate profesor of Theology at Fuller Seminary in Pasadena, CA. Dr. Tibbs has also served as a lay representative of the Greek Orthodox Archdiocese of America to the National Council of Churches, based in New York.

Ecumenical Dialogue & Philanthropic Work with Other Christians at St. Paul’s 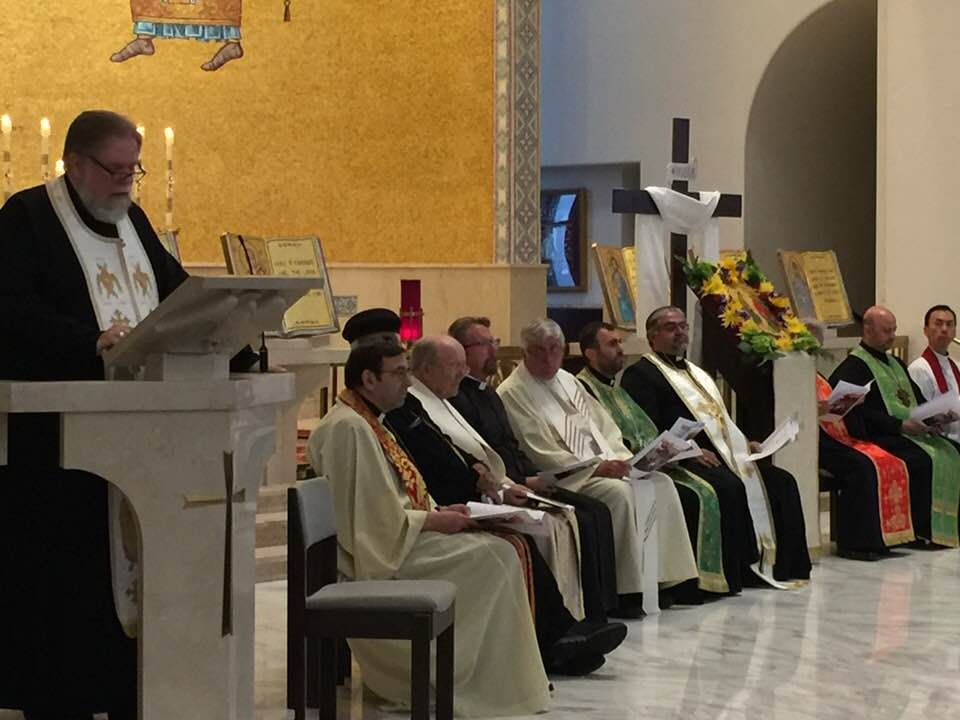 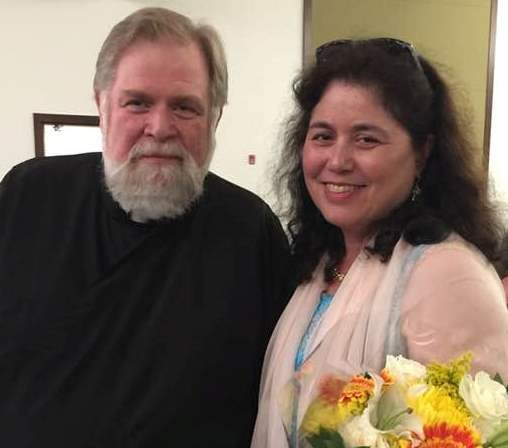 Irma Contreras is the founder of the annual Roman & Eastern Catholic and Orthodox Christian Ecumenical Service of Prayer for Christian Unity at Pentecost .

This prayer service was held Friday, October 10, 2014 at St. Paul’s Greek Orthodox Church, Irvine, CA. “All who want to live a godly life in Christ Jesus will be persecuted” – 2 Timothy 3:12 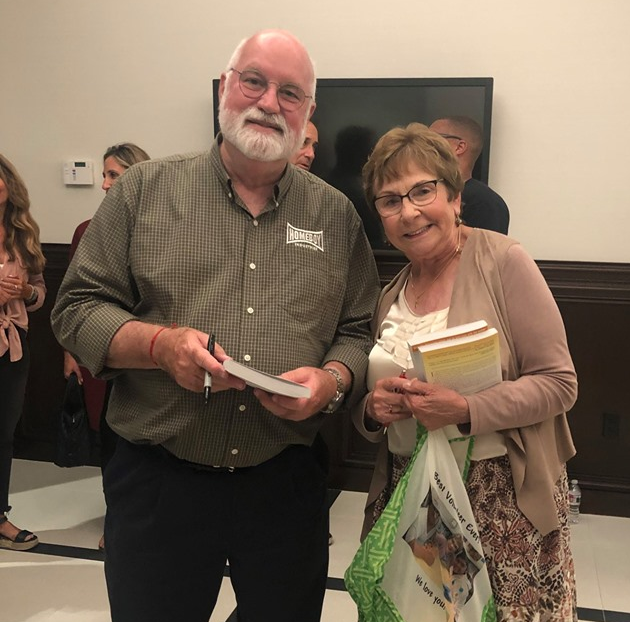 This talk was given on September 24, 2019 by Father Gregory Boyle, founder of Homeboy Industires, the largest gang-intervention, rehabilitation & re-entry program in the world.

Disagreement and Dialogue among Christians

What is Christian Unity?

What Does Unity Mean in the Orthodox Church?

Why was the meeting between Pope Francis and Ecumenical Patriarch Bartholomew so important? We’re looking at Catholic-Orthodox history in this episode of Be the Bee!

Christians seem more divided than ever. Is there really such a thing as “one” Church? Does Christian unity even matter?

Frederica Mathewes-Green explain that Orthodox Christians believe the same thing—they hold the same faith. And it is a faith that, when practiced, yields results.

Representatives of churches worldwide gathered at Geneva’s St Pierre Cathedral for the 70th anniversary of the World Council of Churches (WCC), where the Ecumenical Patriarch Bartholomew urged continued efforts for unity, justice & peace.

Secretaries of the North American Orthodox-Catholic Theological Consultation look at progress in the 50 years since Vatican II.

Pope Francis met with Ecumenical Patriarch Bartholomew on May 25, 2014 to commemorate the 50th anniversary of the meeting of Pope Paul VI and Ecumencial Patriarch Athenagoras.

The Role of the Papacy in the Christian Church

Some Questions and Answers by Father Steven Tsichlis

The Holy Spirit, Pentecost and Speaking in Tongues

An Orthodox Christian View of Glossolalia by Eve Tibbs, Ph.D.

Elected the 268th Patriarch of Constantinople in 1948, Athenagoras was active in the ecumenical movement, seeking to establish better relationships among Christians. Perhaps most notable was his meeting with Pope Paul VI in Jerusalem in 1964, which resulted in the mutual lifting of the anathemas that had separated Orthodox and Roman Catholic Christians since 1054 AD. This symbolic gesture opened the possibility of authentic dialogue between the Orthodox and Roman Catholic Churches for the first time in centuries. Patriarch Athenagoras died on July 7th, 1972. The excerpts here are taken from the book, Conversations with Patriarch Athenagoras, written by the French Orthodox theologian and writer, Olivier Clement (1921-2009), and published in Paris in 1969.

The attached document also includes text of the joint Catholic-Orthodox declaration, approved by Pope Paul VI and Ecumenical Patriarch Athenagoras I that was read simultaneously at a public session of the Second Vatican Council in Rome and at a special ceremony in Istanbul on December 7, 1965. This declaration lifts the exchange of mutual excommunications in 1054. 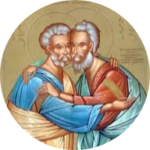 The Huffington Ecumenical Institute at Loyola Marymount University follows the pioneering work of Patriarchs and Popes during the last forty years in rapprochement between the Churches of Constantinople and Rome. The goals of the Institute are to promote the unity of the Orthodox and Catholic Churches; to provide opportunities for fraternal encounters between these two faith communities; to provide resources and forums for reflective and frank ecumenical discussion and dialogue at local, regional, national and international levels; to foster ecclesial and academic interest and leadership in constructive ecumenism; and to build a leading collection of library resources in the areas of ecumenism and Orthodox theology.

Two pillars of the center’s scholarship are the Journal of Orthodox Christian Studies and the Public Orthodoxy online editorial forum, which is read worldwide. Our lively panels, conferences, and seminars—such as the Patterson Triannual Conference and our annual Orthodoxy in America lecture—place us at the center of New York City’s thriving intellectual community.

The Society of St. John Chrysostom — Western Region is an ecumenical organization of laity and clergy of the Eastern and Oriental Orthodox Churches and the Eastern Catholic and Roman Catholic Churches.

We work to make known the history, worship, spirituality, discipline and theology of Eastern Christianity, and for the fullness of unity desired by our Lord and Savior Jesus Christ.

The Lausanne-Orthodox Initiative is a movement of Orthodox and Evangelical Christians who wish to respect each other’s beliefs, learn from each other, and support one another as we each obey the call to share in God’s mission.

The goal of the Lausanne-Orthodox Initiative is to reflect constructively on the history of relationships betwween Orthodox and Evangelicals in order to work towards better understanding, and encourage reconciliation and healing where wounds exist. Through this process Evangelicals and Orthodox are mutually enriched and strengthened in the work of the mission, working towards mutual repsect, support and cooperation in the spirit of our Lord’s prayer for His Church.

The Fellowship of St. Alban and St. Sergius (Sobornost)

Founded in 1928, the Fellowship of St. Alban and St. Sergius is an organization of Eastern Orthodox and Western Christians (primarily Anglicans and Roman Catholics). Its stated purpose is to “pray and work for Christian unity, and provide opportunities for Orthodox Christians and Christians of Western traditions to meet and get to know one another, and so to deepen their understanding of each other’s spirituality, theology and worship.” Headquartered in Oxford, England, the fellowship exists with the approval of both the local Orthodox hierarchy and the hierarchs of the Roman and Anglican churches. Its patron saints are St. Alban and St. Sergius of Rostov.

Among other things, the Fellowship maintains a ministry of providing information about Eastern Orthodoxy to Western Christians in England and elsewhere. Each year the Fellowship also provides grants to organizations and initiatives which are in keeping with its mission. There are also Fellowship-sponsored activities in several Orthodox nations, including Greece, Romania, Russia and Serbia.

Membership in the Fellowship is open to any Christian who is a communicant of a recognized Christian body, and who desires to pray and work for Christian unity. Some notable members of the fellowship are The Most Rev. Rowan Williams, current Archbishop of Canterbury, Bishop Kallistos (Ware) of Diokleia, Bishop Basil (Osborne) of Sergievo and His Eminence Archbishop Gregorios of Thyateira and Great Britain.

The Orthodox Unity (Orthodox Joint Commission) website features various documents concerning Eastern Orthodox and Oriental Orthodox joint commission and unity. A number of statements have been issued by the Joint Commission, as well as agreements relating to Pastoral matters. The main agreement is that “We have inherited from our fathers in Christ the one apostolic faith and tradition.”