What is the Orthodox Church?

Although St. Paul’s as a community celebrated its first services in Irvine in 1978, it is part of the worldwide Orthodox Christian Church that began on the day of Pentecost in Jerusalem as described in the Acts of the Apostles, and today spans the globe from Palestine to Japan, Greece to Tanzania, Russia to Argentina, England to Korea, Romania to Kenya. Initially established by men and women of Greek descent, St. Paul’s today reflects the American experience and is comprised of more than 450 families representing more than a dozen different nationalities.

Although we are one of the largest Christian communions in the world, many people visiting St. Paul’s for the first time ask: What is the Greek Orthodox Church? The best way to answer that question is to ask a couple of questions. Did you know that every book of the New Testament was originally written in Greek? Did you know that the Apostle Paul preached in Athens not far from the Parthenon and wrote five letters to the Churches he established in Corinth, Philippi and Thessalonika that are today books of the Bible?

Who Are We?
The answer is actually very simple:
We are that Church written about on the pages of the New Testament some 2,000 years later! 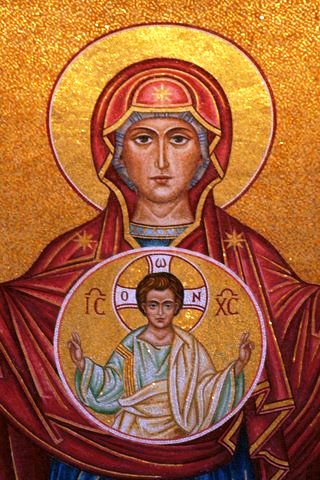 Many people believe that in order to be Christian, you must be a member of a Roman Catholic, Protestant or more recently, an evangelical or non-denominational church. As Orthodox Christians, we are catholic, but not Roman Catholic. Catholic is a Greek word that means “wholeness, fullness, integrity” and, secondarily, “universal” and “open to all.” We confess the Christian faith in its fullness, and our Church is open to everyone who confesses that faith and wants to live it.

Evangelical comes from the Greek word that means “Gospel” or “Good News.” We are a Gospel-centered and Gospel-sharing people. But we are not Protestants. The root of the word “Protestant” is protest. We did not participate in the 16th century Reformation that protested, among other things, the sale of indulgences by the Roman Catholic Church of that time. Nor are we non-denominational, a popular term in contemporary American Christianity. Rather, we are pre-denominational, as our history goes back to the earliest Church, before any of the many Protestant denominations existed.

And Orthodox is a Greek word that means both “the true way to worship” and “straight thinking.” Attach it to the word “Christian” as we do and it describes a person trying to live according to the Gospel.

Newcomers and visitors are always welcome at St. Paul’s! While it is our hope that this website will help you learn more about our parish and the Orthodox Christian faith we confess, we hope – above all else – that you will personally come visit us. Please feel free to visit St. Paul’s and pray with us on any given Sunday. You will discover an ancient yet dynamic faith, a welcoming Church family, and perhaps even a spiritual home where you can plant roots to deepen your relationship with Christ in the Holy Spirit.

In this video, Fr. Andrew Stephen Damick comments on 5 misconceptions people often have of the Eastern Orthodox Church.

Some say Orthodox Christianity is one of the world’s best kept secrets. So let’s talk about what Orthodoxy is. At it’s core, Orthodoxy is about the Gospel, the Good News of our new life in Christ.

Our journey begins with the founding of the Church, the spread of Christianity to “nations” by the Apostles, the Gospel and the institution of Sacraments.

After the stabilization of the Church, the journey continues through the period of the Nicene Creed, Patristic Scriptures, Divine Liturgy and Icons. During this same period, however, the official division of East and West is witnessed and concludes with a gradual rift in matters of faith, dogma, church customs, politics and culture.

The Church becomes the only institution perceived by Greeks as the preserver of their national identity during 400 years of Turkish rule. By the end of the 19th century, a worldwide Orthodox community is born and the Church expands its influence to major social and philanthropic concerns.

The Creed (Text Only)

The Nicene Creed
I believe in one God, […] 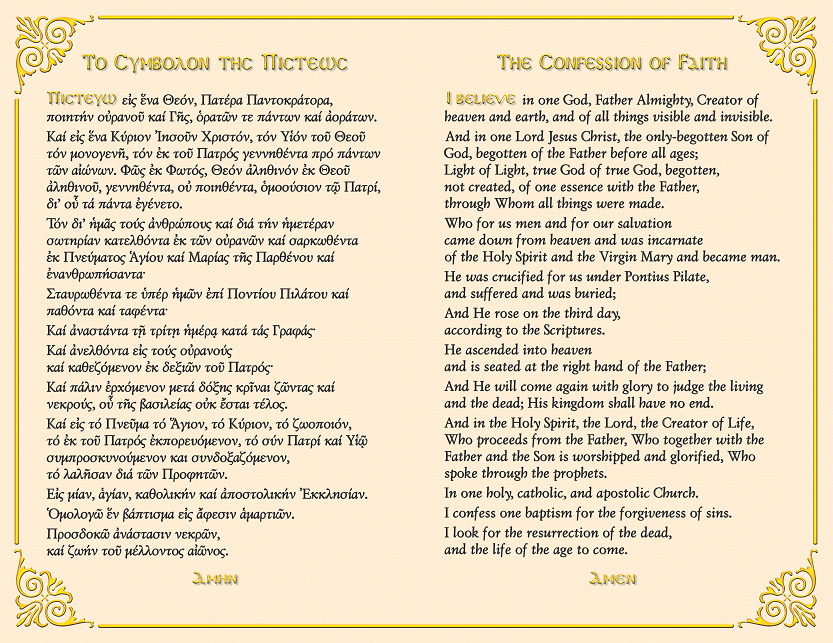 The Creed with Scriptural References

The Creed with Scriptural References

The Nicene Creed with Scriptural References