The Word “Icon” as It Appears in the Scriptures

The word icon is a transliteration of the Greek word eikon and is found in the New Testament, particularly in the letters of the apostle Paul. While most Roman Catholic and Protestant Christians are familiar with the biblical theme of Jesus as the Word of God made flesh (John 1:1-14), Orthodox Christians also celebrate the biblical theme of Jesus as the Icon or Image of God.

The icons found in Orthodox Churches are a celebration of the fact that Jesus Christ is indeed the Word of God made flesh and that anyone who has seen Jesus has seen the Father (John 12:45 and 14:8-12). As the 7th Ecumenical Council held in the city of Nicea in 787 AD proclaimed, icons are in color what the Scriptures are in words: witnesses to the incarnation, the fact that God has come among us as a person whom we can see, touch and hear. In fact, in the traditional language of the Church, icons are not merely painted but written and an iconographer is sometimes called “one who writes icons.”

Below are listed some of the places that the word icon is found in the original Greek text of the New Testament. Normally translated by the English words “image” or “likeness” in the New Revised Standard Version and the New International Version, in the texts given below the transliterated word icon has been left in the text.

“He [Jesus] is the icon of the invisible God.”

“And we all, with unveiled face, reflecting the glory of the Lord, are being changed into His icon from one degree of glory to another; for this comes from the Lord who is Spirit.”

“Do not lie to one another, seeing that you have put off the old nature with its practices and have put on the new nature, which is being renewed in knowledge after the icon of its Creator.”

“In their case, the god of this world has blinded the minds of unbelievers, to keep them from seeing the light of the Gospel of the glory of Christ, who is the icon of God.”

by FREDERICA MATHEWS-GREEN
On the Orthodox practice of kissing icons, crosses and the Gospel Books
Read More
Read More

Praying With Icons: A Short History of Icons

Praying With Icons: Qualities of the Icon

Icons: Word and Image Together

Theology Without Words: Understanding the Language of Icons

The Role of Matter in Iconography & the Liturgical Arts

Learn All About Ikons, Their Meaning and How They Are Made. For almost 2000 years the Christian ikon has always been the object of prayer and contemplation for believers. In the past few decades it has also become the realm of collectors. Magnificent new exhibitions of ikons and the art of Byzantium have vastly increased interest in them.

This site was created to help the novice learn about ikons.

The Orthodox Arts Journal publishes articles and news for the promotion of traditional Orthodox liturgical arts. The Journal covers visual arts, music, liturgical ceremony and texts, and relevant art history and theory. The Journal presents these topics together to highlight the unified witness of the arts to the beauty of the Kingdom of God and to promulgate an understanding of how the arts work together in the worship of the Church.
View Here

Maria Sigalas-Spanopoulos & Nikolas Spanopoulos: “According to Divine Providence, each icon we paint should be unique. We are aware of the fact that numerous believers will direct their prayers and fears to them and they will be objects of piety and veneration.”

Andrew Gould, artisan and designer specializing in traditional buildings and liturgical art. When designing churches and liturgical art, Andrew works in the Eastern Orthodox traditions (Byzantine and Russian), and his work can be found throughout North America and beyond. 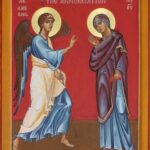 Aidan Hart, Painter & Carver. His aim, in accordance with the Byzantine icon tradition, is to make liturgical art that manifests the world transfigured in Christ. For inspiration Aidan draws in particular on the Byzantine, Russian and Romanesque icon traditions. 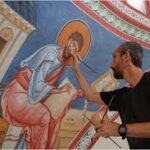 Vladimir Grygorenko, Orthodox Byzantine Iconography: “Orthodox iconography is grounded not in the individual artist’s ego, but in Tradition, and represents an image of God and His saints.”

Orthodox Christians, like the earliest Christian communities who met in the catacombs of ancient Rome and other places, believe that art can be used to praise and glorify the living God. To learn more about the beauty and meaning of the art that adorns the interior of St. Paul’s, please view the brief videos below:

Fr. Steven Tsichlis answers the question: Why are there icons in the Orthodox church?

In this video, Frederica Mathewes-Green talks about a lighting a candle in front of an icon. Is it idolatry?

In this video, FOCUS shows how each of us is an icon, made in the image of God. FOCUS North America is a national movement of Orthodox Christians, united in faith and joined by a desire to provide action-oriented and sustainable solutions to poverty in communities across America.

Revival of Orthodoxy In Russia – Exhibition in Moscow